Living on ones own for the first time is an experience in itself, wherever that place may be! And, Beirut has in store some interesting twists for this newbie.

Let’s start with my first shower. I turned on the tap and to my joy the water ran warm! I breathed a sigh of relief. I remember too well having to heat water on the stove to wash when I lived in Italy. But, when done, I opened the curtain to find my bathroom flooded! I had put the shower curtain inside the rim of the shower boundaries, like I was instructed, but I guess that was not enough! Now, every time I shower I expect the puddle and the fact it won’t dry for a few hours even with the floor drains. 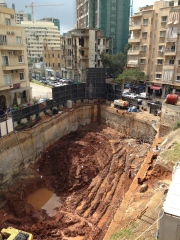 The construction outside my window, under my deck!

Then, the morning of my first day I was surprised to find myself awake at seven am.  “Why?” I asked myself drowsily after I had glanced at my cell phone watch.  The answer would lie in front of me when I opened my curtains. My studio was right on top of a major construction site. And, unlike in the States where time regulations are generally obeyed (noise production can’t commence until after nine am), this certainly was not the case here! And to my shock, construction continued on Saturday morning too! Sunday seems to be the only day of rest, at least in this part of town.

Another snafu occurred, this time under the category “my bad,” when after showering I found the bathroom undulating with at least two inches of water. But, not just any water, dirty water!  I thought it was due to my hair stuck in the drain but, upon returning later in the evening, I was greeted with reprimands: NO TOILET PAPER down the toilet! There is a wastebasket right on the side for all paper materials!” (This is, of course, all in a mix of French and Arabic).  I must have turned bright red from embarrassment, “I really didn’t know! In America we flush paper down the toilet no problem. Nobody told me you didn’t here!” Today, I was again scolded; this time by the once-weekly maid who explicitly told me what, and I mean EVERYTHING, that came up through the drains due to my flushing of paper.  Even though I spent the past summer here in Beirut, I never came to learn of this rule, which must be second nature for Lebanese.

Up next: Decoding the MANY different types of marriages in Islam