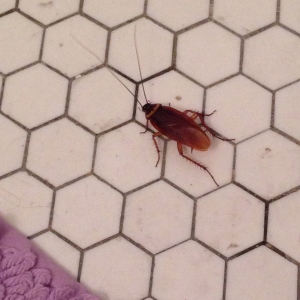 In a prior post (Living Beirut? No, I prefer to be a summer tourist) I lashed out against living in Beirut (construction on Sunday, lack of security, traffic etc.) and now, living in New York City, which some consider “the center of the world,” I feel I must apologize to Beirut by talking about my living experience here in NYC.

Let’s start at the beginning. I am from California and we do not have cockroaches. So, when I moved into my studio apartment on September 2nd, 2013 I completely lost it when I found cockroaches hosting cocktail parties on my floors. And they wouldn’t even die when I put them down the toilet!

Dressed in my nightly layers

Then in November, when it started to get winter-coat cold and I needed heat, of course the radiators in my apartment didn’t work. It was so cold in my studio that even when the tough superintendent (what one would call a janitor in Lebanon) walked into my apartment, he had to put on a big winter coat and boots. To cope, I wore double socks, a hat, two pairs of pajamas, a sweater and a scarf to bed and still had to sleep in fetal position to feel almost comfortable. Frozen nights were finally warmed when I bought a small heater, and the radiator was fixed for a wooping fee of $700 dollars (thank God my landlord paid). Then the winter really started to never end.

Evil mouse in the Nutcracker Ballet

Next there were the mice. I ignored it for a while, pretended I didn’t hear scurrying. It’s your imagination I told myself until I actually saw one! Its long tale snaked across my kitchen floor and I screamed. In California, due to an outside compost bin, my family’s home hadrats, but out in the open, in big spaces, it isn’t quite as petrifying. Here, in my tiny apartment, with no real door between the kitchen and my bed, it was terrorizing. In my head, the mice in my kitchen became bigger than the humongous mice dressed in military suit found in the Nutcracker ballet. I went out to buy glue mice traps and caught the mouse soon after. All I wanted was to get out of this mouse-infested apartment. Why am I here?  I kept asking myself. 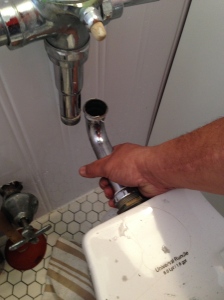 My disconnected toilet pipe from the pipe in the wall

There was the leaking sink and then there was the toilet problem. All of a sudden, the toilet flush stopped working. The hinge itself had no leverage. Now, this could get awkward pretty fast if I don’t get someone to fix it! Thank God I hadn’t eaten or drank much that day. Subsequently, the whole back of the toilet got disconnected from the pipe in the wall. Water sprayed to flood the bathroom and reached the living room. I had had it.

In March, a small electrical fire occurred when the vacuum was plugged in; wires were so old. And then, there was the gas leak. Supposedly there was more than one! Although plumbers fixed the leak a week after it was discovered, the whole building did not have gas (which means did not have a working stove, oven and dryer) for at least a month. It could have been worse—thank God we had hot water.

When I was in Beirut, I never once had these problems that seem so 19th century. I never once saw a rat or mouse and the bathroom only flooded when I put paper down the toilet when I shouldn’t have.

Today, I found nesting cockroaches in my AC. So, living NYC? No, I prefer to be a spring tourist, and I am heading back east.