Our Constitutional Rights Going Out The Window Again? 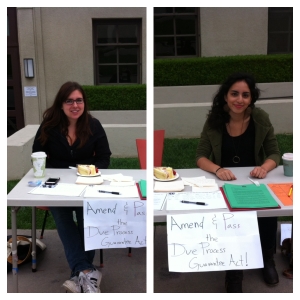 Eleven long years after the preventative detention policy was implemented under President Bush, the United States is once more enacting unconstitutional legislation that infringes on our civil liberties. The annual National Defense Authorization Act, passed this past December 2011, allows the government to detain innocent Americans indefinitely if it suspects they are involved in terror-related activities. This could be the reality unless the Due Process Guarantee Act (DPGA) is passed, a bill currently in consideration by the Congress and sponsored by Senator Feinstein and Congressman Geramendi. Even though you may think you are not be an explicit target of the new provisions, the NDAA threatens the natural rights of all Americans in taking away the right to a fair trial. I ask,  wasn’t this country  founded on the basis of freedom and justice for all?

The National Defense Authorization Act (NDAA) is a bill passed annually by Congress and signed by the president to provide the military with a budget. Often, it includes additional language surrounding military and defense policy, but in the most recent NDAA signed by President Obama, legislators have added new provisions stating that all individuals can be detained indefinitely, without a due process guaranteed, if under suspicion of terrorist links.

This country has witnessed similar events in the not-too-distant past. The internment of Japanese Americans following the Pearl Harbor attacks, as well as the blacklisting of suspected communists in the 1950s give light to instances in which the government suspended the constitutional right for a due process. In the aftermath of 9/11, federal and state legislatures enacted similar laws that threatened immigrant communities, justifying their policies on the basis that the country was in a state of national emergency. Never having been charged with a crime, 2,870 Muslim immigrants were detained during that time, and many were not released until months later. A decade after 9/11, the government is still passing laws aiming to prevent terrorism, laws which invariably revert to discrimination against the Muslim community. Their passage is most striking considering how they contradict both the Fourth and Fifth Amendments of our Constitution.

After recognizing the NDAA’s clear breaches of the Constitution and discrepancies, Senator Feinstein and Congressman Garamendi responded by proposing the Due Process Guarantee Act (DPGA) in January 2012, which would amend the NDAA to ensure a fair hearing and trial process for all American citizens. The bill currently has 63 co-sponsors in the House of Representatives and 26 in the Senate, crossing party lines and agendas. It has been endorsed by the likes of Senator Rand Paul, a Republican from Kentucky and Congressman Gary Ackerman, a Democrat from New York.

The NDAA expands the power of the government to detain Americans without being charged with a crime, which will disproportionately affect minority groups inside the United States, just as the PATRIOT Act’s racialized surveillance policies affected the African-American and Hispanic communities. Under the PATRIOT Act, the government expanded its wiretapping and surveillance programs aimed at both demographics, as well as the Muslim and Arab immigrant community. The FBI and police departments across the country could take advantage of the indefinite detention provision under the NDAA to detain Americans without due process, simply by claiming a link to domestic terrorism.

Organizations like the Muslim Public Affairs Council (MPAC) have rightfully taken interest in the Due Process Guarantee Act, as the Muslim community fears that without protections, they will be extremely vulnerable to state-sanctioned discrimination and unwarranted detention. The Council advocates for not only the passage of the DPGA, but also proposes a revision to the DPGA to include due process for all individuals both inside the U.S. and as they travel overseas. MPAC, as well as other advocates of the Due Process Guarantee Act, are pressuring Congresswomen Judy Chu to push the bill through committee. She sits on the coveted committee currently holding the DGPA bill hostage–the House Judiciary Committee.

While President Obama has said that he would not enforce many of the most reprehensible elements of the new NDAA, his commitments have not been written into law, nor do they represent anything more than a politician’s oral pledge. His personal assurances bind neither himself nor future presidents, and all people should be alarmed. In the practice of American foreign policy, diplomats and politicians often preach democracy and due process. But ironically, it might be said that back home, America is hardly a model for those very same virtues.

Note: A version of this article was published in the Occidental Weekly, April 2nd edition. This article was co-written by myself and the wonderful Dina Yazdani of http://theglobalconsciousness.wordpress.com/ Check out her insightful blog on Middle Eastern political complexities!